Published in The Scotsman 4 December 2013

SHE may already have played in three majors but Sally Watson is having to start at the bottom rung of the ladder in her bid to secure a foothold in the women’s professional game.

The two-times Curtis Cup member is among seven Scots setting out in Morocco tomorrow in the final two pre-qualifiers for next week’s Ladies European Tour Qualifying School.

Watson’s presence in Rabat is something of a surprise on its own, given the 22-year-old from Elie seemed destined to follow in the footsteps of Janie Moodie and Mahiri McKay by cutting her professional teeth in the US.
END_OF_DOCUMENT_TOKEN_TO_BE_REPLACED

Four days after securing my Ladies European Tour card for 2014 and I am still living in a euphoric state as the opportunity of realizing my dream of becoming  one of the top female professional golfers in the world lies ahead.

LET Tour School itself was played in Morocco and as with most things in life the experience was not all plain sailing. My dad was kind enough to accompany me on the trip and therefore share in all of the ups and downs that the trip provided. (I also have to just quickly say how without his support-both as a caddy and as a father- I would not have been able to compete at the high level that I did (finishing 5th in the Pre-Qualifier and then going on to finish T-2nd at the Final Qualifier with final rounds of 69 and 68. So THANK YOU dad-you and mum are the best parents a kid could ever ask for!).

Back to Morocco and the tales of Tour School. It did not take long before the first disaster struck. My dad and I had decided to hire a car (which if anyone is ever traveling to Morocco is something I would recommend you think very carefully about before signing the car rental papers!) Before leaving Scotland my dad had researched driving in Morocco and came across a LegalNomads article titled “Decoding the Insanity of Driving in Morocco” in which Jodi (the author) describes how Morocco is “a country in which conventional road rules are vaguely optional”, “honking is as ubiquitous as seeing a donkey on the side of the road” and can mean anything from “I am going to pass you” or more often “I am in the course of passing you,” to “I suspect the light is about to go green and you haven’t already been revving your engine in preparation, ergo you are going to waste my time with 2 seconds of slow driving and ought to move your ass into gear.” (This my dad and I found to be one of the most common uses of the horn, which basically meant the roads were never amiss somebody honking at somebody else.)

The article also has an important note on Lane Division Lines, basically that they are not to be paid any attention to as “staying in your own lane in Morocco” (or the correct side of the road for that matter) “is a concept not remotely entertained in Morocco” (something my dad would have been wise to have taken to heart before we arrived rather than after a few days of experience).

Anyway, my dad was either brave enough to go ahead with renting a car after reading this article or mistakenly skeptical that the article had over-exaggerated the chaos which is driving in Morocco and so off we went from the airport in our little rental ready to take on the roads of Morocco. My dad, always very prepared had downloaded TomTom’s maps of Morocco, thinking that, as most people do these days, with Satellite Navigation getting lost is a thing of the past-boy were we wrong!! In our attempts to find our hotel for the first week in Rabat, we somehow managed to literally drive through a Moroccan street market in the middle of one of Morocco’s more heavily populated neighbourhoods (to put it mildly)-roads which are barely big enough for a car before vendors begin setting up their stalls and then seemingly thousands of people swarm the streets to buy tomorrow’s vegetables or some new discounted Gillette deodorant! Driving through the market-obviously completely lost, despite having put into TomTom the address of our hotel found on the hotel’s own website-would have been bad enough without TomTom suddenly deciding to shut down. As I am sure you can imagine, this all resulted in a significant increase in the blood level of my now swearing like a sailor driver/father. Finally we managed to get ourselves out of the market area and onto a somewhat more main road, found a gas station, regrouped and only about an hour after scheduled arrival time, find our hotel. Not exactly the ideal start to 2 of the most important weeks of my life thus far!

Week 1 -the Pre-Qualifier- continued to present itself with challenges including my dad getting stuck in an elevator-with the car keys in which were my clubs-before the third round and me catching a stomach virus sometime after the first round which lasted until the final round meaning I consumed all of about 500 calories for 3 days of tournament golf, most of which came out of me, one end or another! All I can say is that, ‘boy we were glad to have simply survived the week let alone qualify for the final qualifier!’

Week 2-the Final Qualifier- was pretty much smooth sailing (although compared to the first week most things would have seemed so). As far as the golf went, I didn’t get off the the best start, being 3-over through my first 7 holes of the tournament (and by the sounds of it, giving most of my family and friends back home a rather stressful Saturday morning watching their computers) although  I managed to stay patient-knowing I had 83 more holes of golf definitely made this easier-and finished only 1-over for the first round. I had made a decision before the tournament started to not look at any scoreboards and just focus on doing the best that I could and let the chips fall where they may, so I was unaware of where my 73 placed me in the field but I think it was around the 30-40 mark which is roughly where I stayed over the first three rounds, shooting 71 and 74 in my second and third rounds. I made a wee tweek to my swing on the range after the third round which allowed me to hit almost every green in the 4th round and helped me shoot 69, despite bogeying the last two holes. I was definitely rather disappointed with this finish but learned some valuable lessons which better prepared me for the pressure of the final round. Unfortunately, (especially for the stress levels of my dad and those following the live scoring at home) I bogeyed the first hole of the final round, with a great up and down. However, rather than rattling me, this calmed me down a little and I told my dad that some of my best rounds have started with a bogey-and this time was no different as I went on to shoot 69, putting me in T-2nd place, safely securing my tour card.

I am already looking forward to next year and all of the opportunities which lie ahead and feel very fortunate to have such an incredible support team-family, friends and coaches- behind me. I only hope I don’t have to rent too many cars in 2014! Happy Christmas everyone! 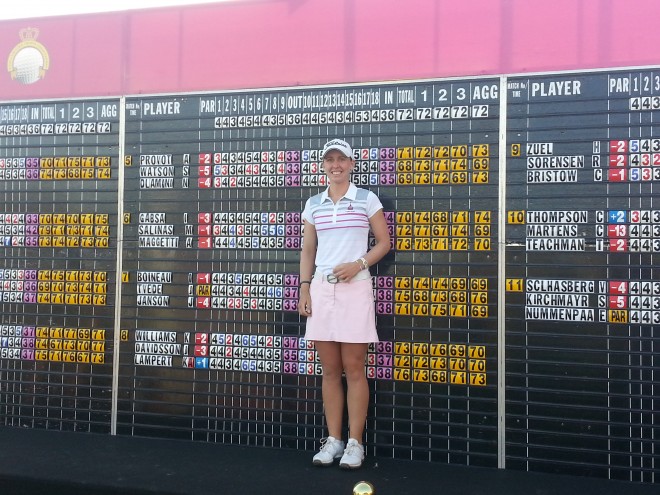 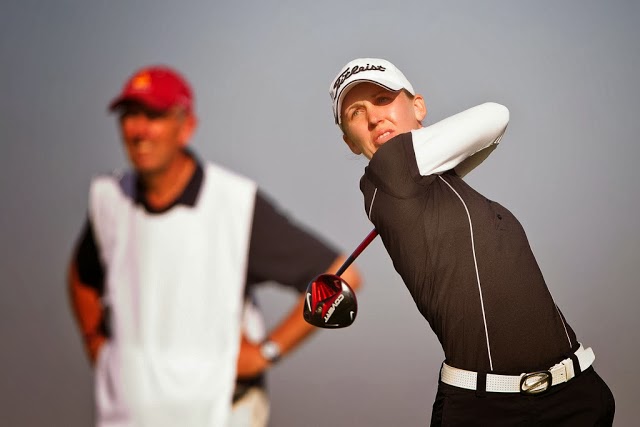